Home is among the towering pines, jagged, snow-capped mountains and sulphur plumes of geothermic activity. I feel at home in the land of fire and ice. The common expression of a tree-less, leafless, barren expanse is thwarted every day as I look out our dining room windows. Towering conifers border the cabin, shrouded in the early morning dew, wet and dripping onto volcanic soil. The birch like wildfire, red berries clinging to dormant branches, growing in clusters from the porch to the Skorradalsvatn. We nestle here for a month, embracing our love as we embrace this intensely dynamic country. This cabin has been our solace in between long and unending drives. 5000 kilometers in two weeks time and we have yet to see a fraction of this magnificent place. Still, in all the beauty we have seen thus far, West Iceland has a special place in my heart.

Located fifteen minutes southeast of Borgarnes, on the northern lowlands of the Skarðsheiði mountain range we plan our days with excitement and adoration of this majestic land. We start slow, right in our front yard and expand outward as our days progress. Trying to understand the mountains, follow the rivers and waterways that lead to Borgarfjörður and Þingvallavtn, we trace the landscape out to Langjökull, the second largest glacier in Iceland that straddle the Western and Southern region. We took the drive up 550 and then turned onto the pothole-riddled, snow patched 551 road toward the base camp. As we steadily navigated the road, grinding misjudged gears, the wind rolled off of the icecap, gusts tearing through the warmth of our jackets. Snow, thrust across the sun drenched sky, sent rainbows swirling about, dancing around the mountains.

As the Langjökull glacier retreats, the melting ice flows through porous lava rock and create the Hvítá River, one section flowing west into Borgarfjörður and the other southwest into the notorious Gullfoss and down into the North Atlantic. In our first few days we stayed in the West and sighted our first glacial waterfalls derivative of Langjökull: Barnafoss and Hraunafoss. Hraunafoss blew us away with its’ striking blue water and distinct resemblance to Plitvice. The whole spectacle was dazzling to the eyes. Crystal clear blue water descending over mossy lava rock cliffs, autumn orange and red leaves still clinging to young birch trees. Barnafoss’ turbulent white water cascading through jagged, steep terrain. Blown away on our first day, not aware yet of the stunning beauty we were still yet to see. 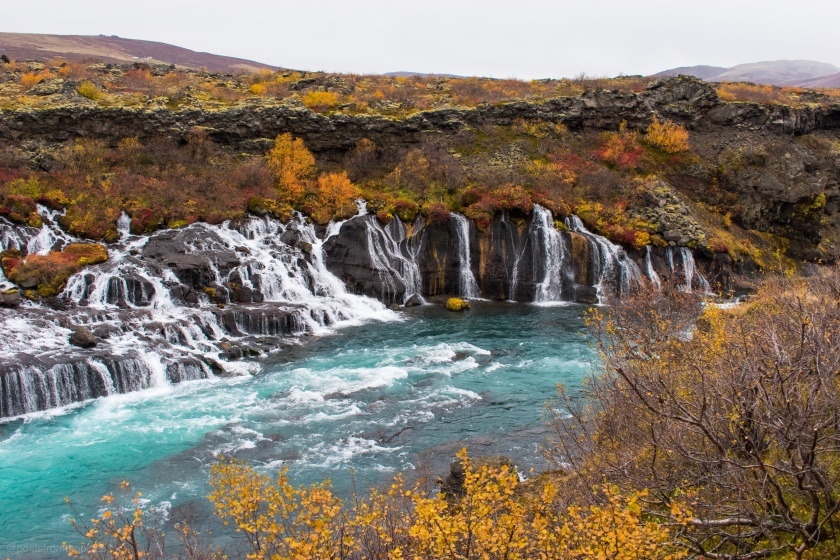 Back at home base we set out following the Skorradalsvatn East which quickly turned into a white knuckled, nerve dropping drive through F508 as we crossed partially frozen creek sized potholes, crumbling boulders, up and over a highland pass and then finally over our first river crossing. Nerves shocked and muscles tensed, we eased our manic thoughts in the therapeutic waters of Krosslaug. A short walk through a grassy meadow and into a thicket of trees lies a built up geothermal pool 42˚ C where four can comfortably bathe. It has been our go to on lazy days at the cabin. 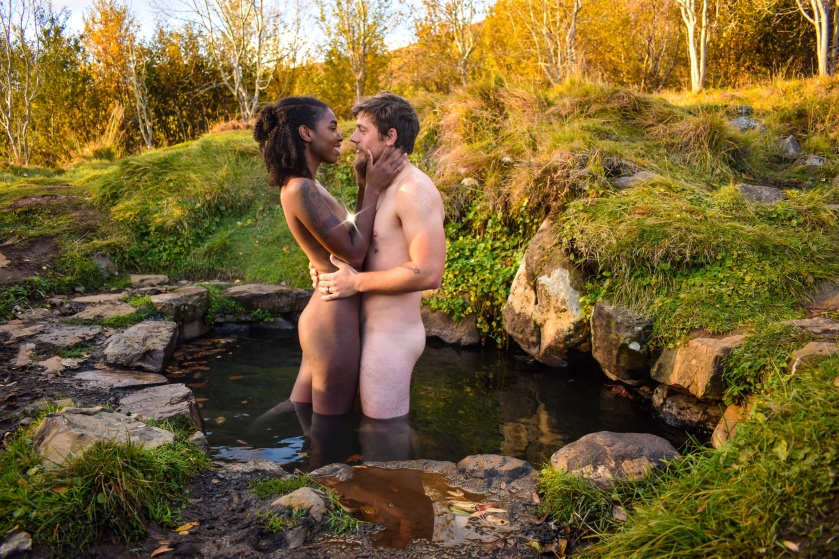 After our first soak, just before the sun went down over the rolling mountains, we drove one mile up the road on 52 from Krosslaug to see another beautiful waterfall. 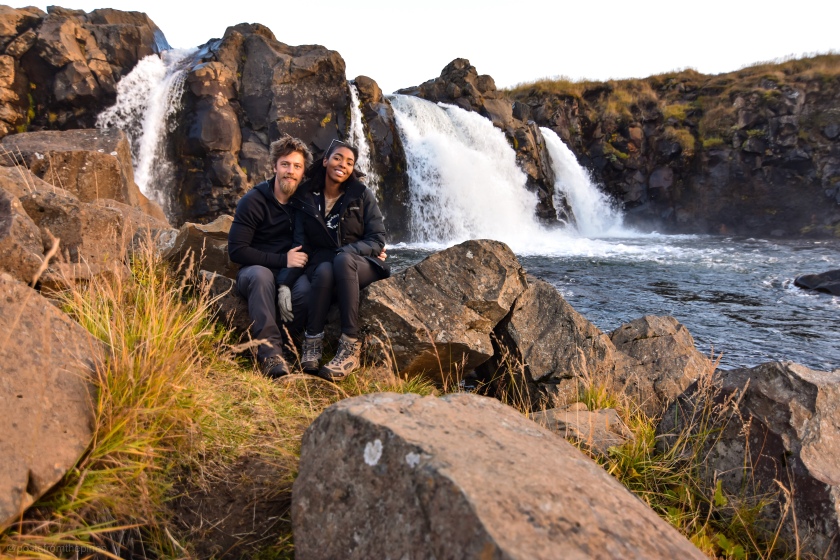 We took another few day trips further West to the Snæfellsnes Peninsula on Iceland roads 54 and 574. Of the many stops along this route our first was the Rauðfeldsgjá Gorge just before the town of Arnarstapi. After a ten minute walk the mossy gorge opens up as a small, trickling stream descends out from it. Many stood in the walkway, fearful of cold water and slippery rocks. After gently pushing past I worked my way up and through the stream, hoping over exposed rocks up to the narrow gauge of the gorge. The walls dark and narrow, lined with dripping moss were beautifully ominous as they narrowed even further up the vast expanse toward the towering opening. At the end of the line a waterfall spills over the edge with a daunting rope ladder for those who dare to trek further into the unknown. I dared not today, for the water was knee deep and the waterfall strong, inevitably I would have been soaked and cold in the beginning of our day.

A few miles up the road in the villages of Arnarstapi and Hellnar the rugged coastline gives way to giant basalt columns, rock bridges and archways. The Greenland Sea constantly slamming into these vertical, hexagonal columns make the cliff edge look like a wave itself as it continues to crash against it. Basalt caverns, black sand shores and pale, foaming blue waters make this landscape incredibly unique and picturesque. The eroding arches, shaving off large sheets of rock, splinter the coastline, reminiscent of a slate rooftop. We watched from below the rock bridge as sneaker waves rolled in quickly, drowning the landscape in brutal waves. An anxious, dramatic scene played on repeat as Nature shows its’ awe-striking power. 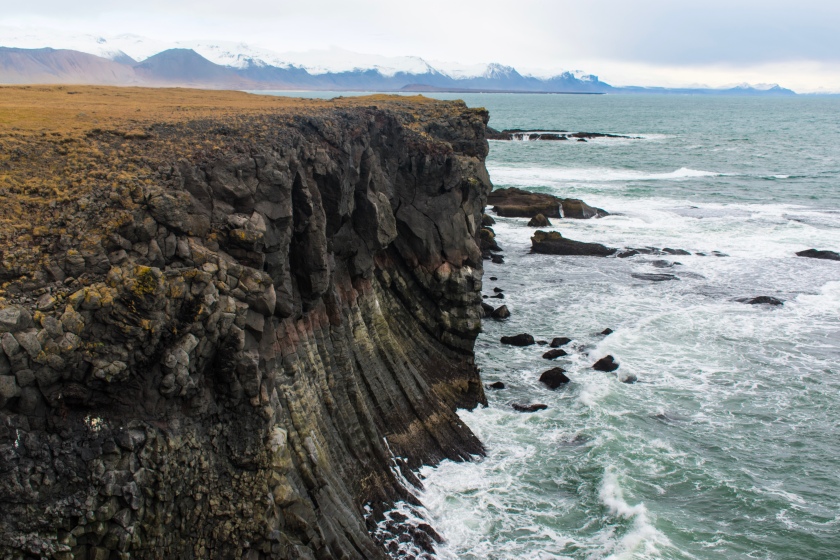 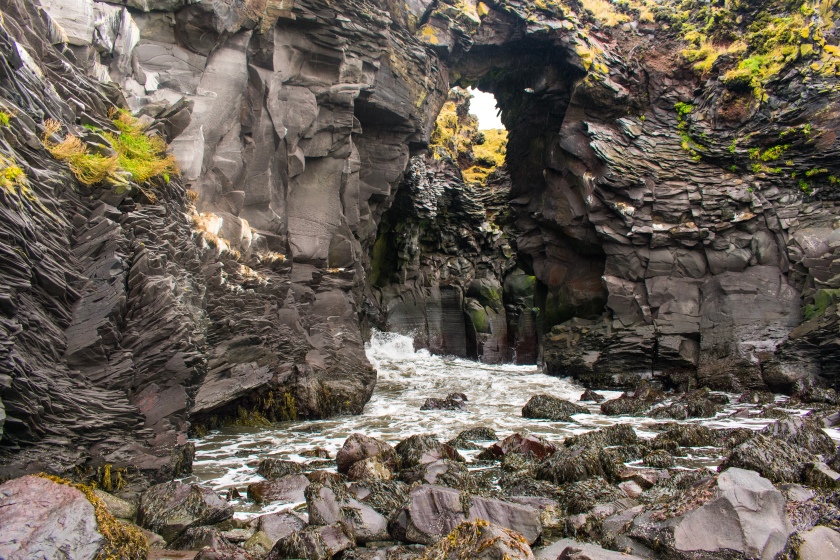 And in this power, just a few miles up the road, Nature shows again the tremendous anxiety of the sea, in the shipwreck on Djúpalónssandur Beach. Twisted and rusted metal lay strewn along the black pebbled beach, mangled bits of a ship destroyed in 1948. As we walk toward the Sea we can immediately detect its’ deadly force. Large waves roaring off the coast, quickly crashing in upon itself, thrusting water up and over large boulders and toward us. Even we thought that we were standing far enough back until a sneaker wave came up onto the dry reaches of the shore, sending us and other tourists fleeing up and out of its’ way. There is no conquest to defeat these waters; one should be humbled upon approach and walk along it with guarded precaution.

As we made our way around the Snæfellsnes Peninsula we entered the Snæfellsjökull National Park which encompasses a glacier on top of an active stratovolcano. Following the coastline it is immeasurably breathtaking. The skies opened up around us and exposed its’ snow covered flanks. From sea to mountain this landscape is absolutely breathtaking, a wonder to behold. We didn’t get to explore the lava tube caves that dot the landscape around the National Park; alas, one month is never enough for this majestic country. A few laps around the West painted a gorgeous picture of this distinct, ever-changing landscape, but I feel to do it true justice would be to lap it over and over again some more. 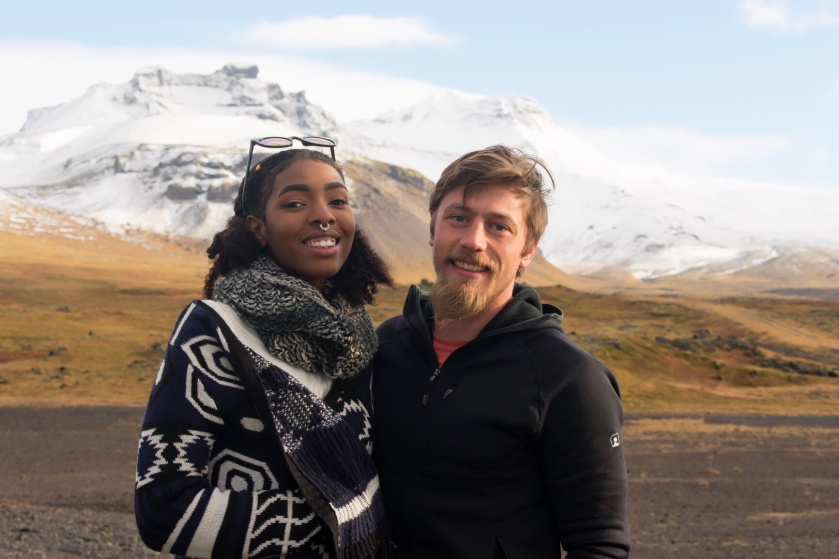 Our last stop on the West was the famed Kirkjufell Mountain in Grundarfjöður. Standing in the backdrop, staring out at the mountain and the lapping waves of the Greenland Sea was poetically mesmerizing. Every few minutes a sprinkle came down upon us, with the sun just above Snæfellsjökull, casting a rainbow up and over the breath of Kirkjufell. After we left we followed the moss covered lava fields along route 54, crested over the pass on 56 and made our way back home to the peaceful cabin among the pines.

* The next segment in our one month Icelandic Adventure Honeymoon will be all about South Iceland, so be sure to follow our blog for the upcoming story! *